Doors Are Why I Drink – Part 2: Our Approach

Okay, so it’s not as bad as it looks, and even to us, it looks over-engineered. But each piece has a purpose. For example, these five states:

These five states have no attached animation clip, and are all set to not write defaults. The state leading from Entry is there to prevent an initial animation from overriding the door position/rotation on start. So, if the level designer leaves the door opened at start, it starts open. If it starts closed, it’s closed. Or, if left somewhere in-between, it keeps its position all the way up to the moment it needs to animate.

The empty states labeled “Pre-Opening” and “Pre-Closing” are there because transitions from “Any State” are not configurable, and we needed to provide a transition time for the transitions coming from where-ever. In fact, due to a limitation in Mecanim, we also had to create a Boolean parameter called “ZeroTimeState”. It’s just there, always set to true. The transitions coming from “Pre-Closing” and “Pre-Opening” have no exit time, and wait on ZeroTimeState to be true to transition out of the state, leading to those states lasting 0 seconds. This can’t be done any other way (without scripting the transition outside of Mecanim with Animator.CrossFade) because inexplicably, states without animation clips have a fixed length of 1 second. We could increase the speed of the lack of animation clip (whatever that means) in the state’s settings, but the speed would have to be infinity in order for the state to take 0 seconds. And of course, the states can’t just be removed because then the transition time between “Any State” and “Opening”/”Closing” would then cease to be configurable. 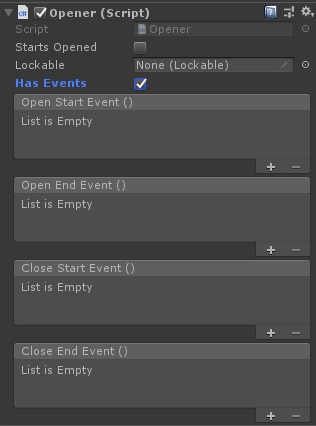 Our Opener.cs script, which provides a way for other scripts to open/close the door programmatically without needing to know the animator controller’s parameters, reads the “IsOpen”, “IsClosed”, and “IsFinishedMoving” parameters to determine what state the door is currently in. Why couldn’t we just add animation events to our animation clips that call Opener.cs directly? Well, that would work, but it would make the whole system considerably less modular. With our approach, any door, including a door on a safe or on an oven, could just drop two animation clips for opening and closing into an Animation Override Controller and the entire system would just work. If we used animation events, each time a new animation clip is made for a door, the animator would have to remember that they have to place two specifically named animation events or else the door mechanism stops working in a subtle way (the Opener script would not be able to properly categorize the door’s internal state, which doesn’t immediately become obvious until another script asks for the door’s state and is told the wrong thing).

The “Open” and “Close” triggers are pretty simple. They just trigger the transitions from “Any State” to their respective state chains. “Toggle” is a convenience trigger for either opening or closing the door, depending on which action was performed last. The second the door enters the “Opening” state, our StateMachineBehaviour attached to that state sets the parameter “IsOpen” to true and “IsClosed” and “IsFinishedMoving” to false. Once the “Opening” state finishes, “IsFinishedMoving” is set to true. This allows us to use “IsOpen” and “IsClosed” as conditions in transitions from “Any State”. For instance, if the “Toggle” trigger is set and “IsOpen” is true, we should close the door, etc. This explains the triple arrows you see in our animator controller:

Each transition from “Any State” to one of the state chains is actually several possible transitions. You can either follow a transition because “Open” or “Close” triggers were set, or because a “Toggle” trigger was set. Additionally, if the door is locked and you either try to “Open” it or “Toggle” it while it was last closed, it plays the “Locked” animation, if one is set.

In our next post, we’ll go over the remainder of the parameters in our Animator Controller, how interruption works, and why it is necessary and vital in any game with free first-person player movement.